Looking for blackness has as it’s main focus identifying the gaps in presentation of
Afro Latino art through the curatorial practices of the region. Through the research of historical references of the African slave trade and its impact on Latin American/ Guatemalan society, the hope of this exploration is to eradicate the erasure of Afro-Latin peoples, their culture and artistic expression through the exposure of the deep seated racism that is evidenced.

Though blacks in Latin America make up a significant amount of the population, they are currently underrepresented in the curatorial practices of it’s art world. Many factors may lend themselves to this reality still the question remains; is this an issue that plans to be addressed? Acknowledging the differences between the mind set of Latin America and its American counterpart regarding race, the understanding that the Mistiso population has within its makeup Spanish, Indigenous and an African contingent, a common thought is that the mixture of peoples makes racial difference less important. The question remains, what is lost in this thought and how does it aid in the suppression of specific populations? For example in the case of places like Cuba, to mention racism is considered an act of sedition as they consider themselves a mixing pot of cultures and traditions. With that being said, where the catastrophic conditions of poverty and questions of access affect the darker side of the equation, this philosophy becomes problematic.
Data illustrates that race continues to be one of the most persistent predictors of poverty in the Americas, which is particularly troubling because African descendant populations tend to speak their nation’s language as their mother tongues — whether it is Spanish or Portuguese — and are in close proximity to urban, coastal, port or mining areas, which tend to be centres for employment and economic growth opportunities. A targeted approach to eliminating racial gaps is needed to combat discrimination and lack of access to opportunities for these large communities.There are an estimated 150 million African descendants in Latin America, according to the World Bank in 2006, which makes blacks the largest marginalized racial or ethnic group. In contrast, there are approximately 28 million indigenous peoples in Latin America, according to 2007 estimates, also from the World Bank. This makes the African descendant population five times larger than the indigenous population.
Race and Poverty in Latin America – UN Chronicle

Methodology-
I have been looking at the work of the Garifundo which at this point seems more performative. With further examination my hope is to discover more of the ways in which art is expressed in these and other Afro-Latin communities. With more research; interviewing historians, and the actual people of the regions in question, I hope to uncover the artists and more of the work. Once the work is uncovered, I would like to explore original ways of presentation that might establish a relevance within the contemporary art context.

wiki
The Garifuna (/ɡəˈrɪfʉnə/ gə-rif-uu-nə; pl. Garinagu in Garifuna) are descendants of West African, Central African, Island Carib, and Arawak people. The British colonial administration used the term Black Carib and Garifuna to distinguish them from Yellow and Red Carib, the Amerindian population that did not intermarry with Africans. Caribs who had not intermarried with Africans are still living in the Lesser Antilles.
Today the Garifuna live primarily in Central America. They live along the Caribbean Coast in Belize, Guatemala, Nicaragua, and Honduras including the mainland, and on the island of Roatán. There are also diaspora communities of Garifuna in the United States, particularly in Los Angeles, Miami, New York, and other major cities. 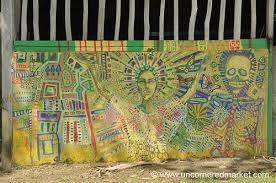 Research: Looking for Blackness- The search for Afro-Guatemalan/Latin contemporary artists.

Books
Blackness in Latin America and the Caribbean: Social Dynamics and Cultural Transformations (Blacks in the Diaspora) Volume 2 Paperback – October 22, 1998 by Arlene Torres (Editor), Norman E. Whitten (Editor)
Book Presentation of Pigmentocracies: Ethnicity, Race, and Color in Latin America
Pigmentocracies is a richly revealing analysis of contemporary attitudes toward ethnicity and race in Brazil, Colombia, Mexico, and Peru, four of Latin America’s most populous nations.
Based on extensive, original sociological and anthropological data generated by the multi year Project on Ethnicity and Race in Latin America (PERLA), this landmark study analyzes ethnoracial classification, inequality, and discrimination, as well as public opinion about Afro-descended and indigenous social movements and policies that foster greater social inclusiveness. A once-in-a-generation examination of contemporary ethnicity, this book promises to contribute in significant ways to policy making and public opinion in Latin America.

****The “Book Presentation of Pigmentocracies” is part of the public programming leading up to our second transnational conference Afro-Latin@s Now: Race Counts! to be held in New York City on October 23-25, 2014.

Though the Panama-born Lindsay grew up Roman Catholic (“I wanted to be a priest, but then I discovered girls”), occasionally attends a Buddhist temple off I-85 (“Buddha was a pretty slick dude”), and edited Santería Aesthetics in Contemporary Latin American Art for the Smithsonian.

Israel Reyes Larrea / teacher /radio show to raise awareness Rights of black people in Mexico
27:16- 29:24. You can’t be great if you suppress the identity of a people

Professor Carlos Aguirre – University of Oregon
33:31-34:24. Malyanbo Slave Market Pizarro brought first slaves to Peru in 1527
Lima was considered a black city 30-40% black
Diseases desmated the indigenous so they the Spanish brought slaves over 100thousand to work the sugar plantations and silver mines

Afro-Guatemalan are Guatemalans of African descent. Afro-Guatemalans comprise 1-2% of the population. They are of mainly English speaking West Indian (Antillean) and Garifuna population. They are found in the Caribbean coast, in Livingston (a Garifuna settlement), Puerto Barrios and Santo Tomas. During the colonial period, African slaves were brought in, but have mixed with the general population and can be referred to them as Afro-mestizos. So, due to miscegenation, the majority of black people became in Mulatto (50% black-50% white) and Zambo (50% black-50% Amerindian), and these in turn became in Quadroon (75% white and 25% black) and Cambujos (75% Amerindian and 25% black). Due to centuries of miscegenation, Afro-Guatemalans (aside from the Garifunas) today form part of the country’s mixed-race, non-indigenous ladino population.