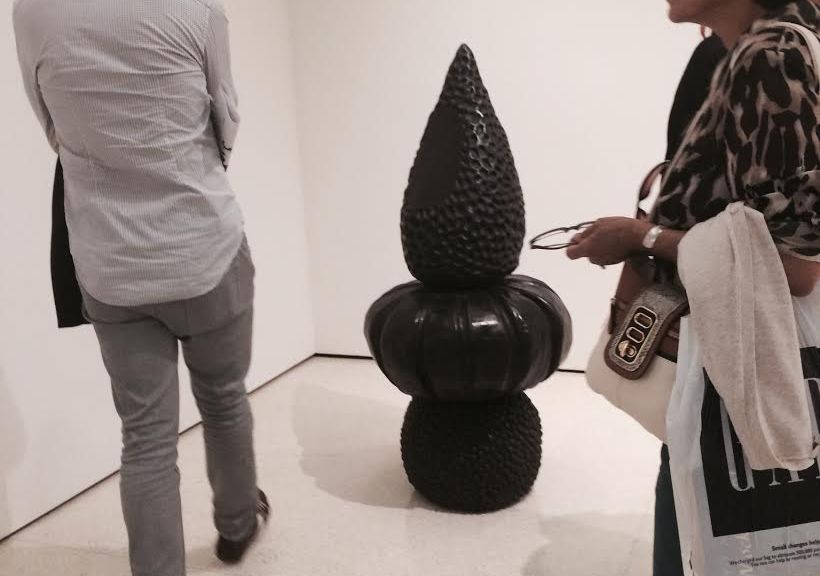 I was struck by the work of Erika Verzutti and artist from Brazil, in hindsight. I suppose that’s a good thing because it implies a resonance. For instance her work Venus on Fire references Venus of Wilandorf a fertility figure, sometimes called the nude woman, which dates back to 28,000 and 25,000 BCE and is one of the first art sculptures ever found. You sense it’s relation to history and blackness. When looking at it you feel it with out touching it. It was one of the few pieces that felt of the earth and organic structure. She inverts it, standing it on it’s head which can mean so many things in it’s context, the context of curation and the context of modern contemporary art.

The work Painted Lady is the personification of a woman. Verzutti uses fruit and found objects, something that people can relate to, and sculpts it into what we recognize as breast and the limbs of a woman. She talks a lot about being local and not being disadvantaged because of not being a part of something. This is much like the experience of women, particularly those of color. Her work to me is about access, certainly this work which reminds me a lot of African sculpture. She uses things essential like food in this case, because we all eat it. We immediately recognize the sensual quality of this work and interact with it on a level that is base human.

Verzutti has a video segment on Artist Talk in which she talks about curation and choices.
In this talk she curates a few pieces within the curation of Under The Same Sun . The pieces she selects are the pieces most associated with found objects or the earth. This is telling about how she sees the world and the things she’s exploring in her work.

Erika Verzutti | Cruzamentos: Contemporary Art in Brazil from Wexner Center for the Arts on Vimeo.

Erika Verzutti is interested in the formal qualities of things found in nature, and her work reveals the beauty and symbolic power of common objects with enigmatic properties. The intuitive and material qualities of Verzutti’s sculptures, collages, drawings, and paintings recall the mid-20th-century Neo-Concretist movement in her native Brazil, which rejected mechanized and overly intellectual approaches to art making in favor of a sensual, intuitive relationship between the artist and the object.

Verzutti initially studied industrial design (focusing on graphics) at the Universidade Presbiteriana Mackenzie, São Paulo, and subsequently studied fine arts at Goldsmiths College, London. Her installation Pet Cemetery was exhibited at Galeria Fortes Vilaça (São Paulo) in 2008 and her work was the subject of an exhibition at the Centro Cultural São Paulo in 2012, the same year her Lilliput was shown on New York’s High Line. She is participating in the 2013 Mercosul Biennial (Porto Alegre, Brazil).